For her second year, Farah Arabian, a PhD student in the Electrical Engineering department, won an award for the paper she submitted in the International Telemetry Conference (ITC). 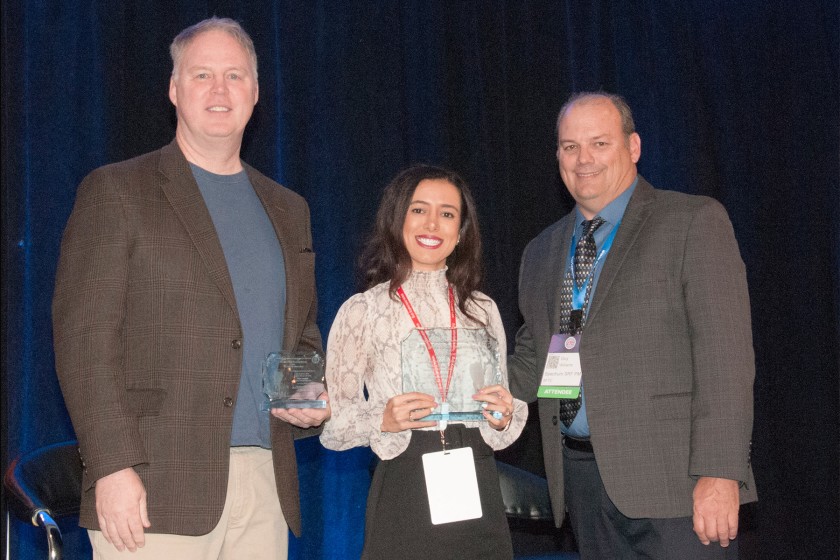 For her second year, Farah Arabian, a PhD student in the Electrical Engineering department, won an award for the paper she submitted in the International Telemetry Conference (ITC). This year’s award, the Myron Hiram Nichols Telemetry Spectrum Award, is given to researchers whose paper help to improve the visibility and presence of the International Consortium for Telemetry Spectrum (ICTS) and the ITC, and satisfies the certain technical criteria. The award included a plaque given by the ICTS and monetary compensation ($1000) provided by the Aerospace & Flight Test Radio Coordinating Council (AFTRCC).

Farah’s article, “Polarization Diversity and Equalization in Frequency Selective Channels in Telemetry Environment for 16-APSK,” explores the best algorithms for dealing with aircraft rotation angles to enhance performance in ground base stations.

Farah explained, “In telemetry, people talk about aircrafts. Aircrafts go through different rotations angles; the aircraft can fly in any direction. It’s mandatory for the aircraft to communicate its signal with the ground base station. In this scenario, two signals are received by the receiver, so it’s really important to know how to process these signals and know how to combine them.”

Along with her advisor, Dr. Michael Rice, Farah developed an algorithm to improve the reception of these signals, then compared it with what is currently available in the market.

“In this paper, we came up with an optimal algorithm to do processing of the received signals and combining techniques,” Farah said. “We compared our results against whatever is currently used in the telemetry world with the receivers that are on the market for telemetry. We saw that our algorithm outperforms what exists in the market.”

The algorithm they worked on for this research paper is the result of two years of research. Farah’s paper last year was about equalization filters. Some of the discoveries from that paper found their way into the research this year.

Farah decided to take on this new paper to stretch herself and contribute to the aerospace and flight-testing fields.

“[I became interested in this area of research] because it’s a challenge. Also, you want a signal to have the best quality because that will increase the performance of the whole system—the system, the aircraft, the receiver, the environment the aircraft is flying through, everything,” she said.

Farah looks forward to improving the quality of aircraft communication with the ground base station through these algorithms and plans to continue her research in the future through another application, fifth generation of mobile networks.